Treating a cold at home with homeopathy 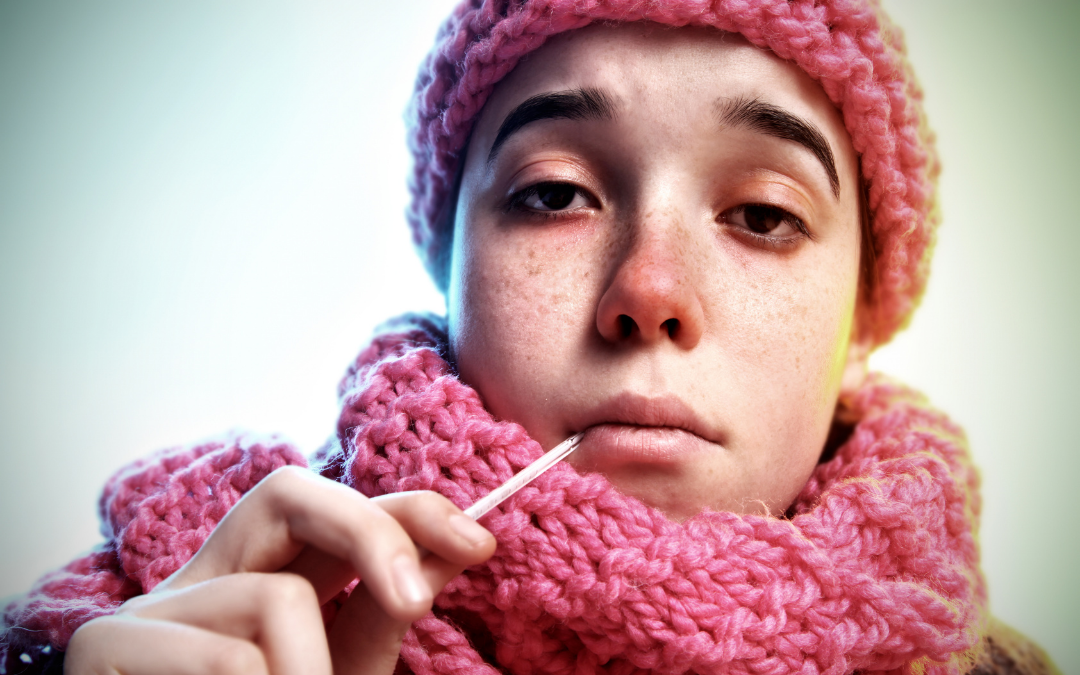 Coughs, colds and flu like symptoms respond very well to homeopathic treatment. With the right remedy your symptoms can be less intense and short lived. You may need to take more than one remedy to resolve your symptoms – this is the nature of dealing with an acute illness.

I thought I would share with you how I used homeopathy (and more) to treat a winter acute. All the remedies used are available in a home prescribing kit available from Helios and Ainsworth’s Homeopathic pharmacies.

Teen Riches was not feeling well. For a few days she was just out of sorts – sometimes you just know when your children are not themselves, often before they do. The school term was coming to an end and it was clear she needed to rest and an opportunity to do something other than school. As the half term holidays progressed, rest and a change of scenery was helping, but not quite enough – Teen Riches was developing a cold and quickly.

Quickly her symptoms moved on and settled into a very sore throat, feeling chilly with pain extending to her ears on swallowing and wanting to be left alone. The next remedy was Hepar Sulph. When dealing with acute symptoms like this I usually start with 30c potency unless the symptoms are very intense. Hepar Sulph helped a little so we repeated – every 30minutes for 3-4 hours.

This didn’t seem to move things along particularly, so looking again at her symptoms which were inflamed, dry throat with painful swallowing I looked at Belladonna and Apis. There was no fever or swollen tonsils so I discounted Belladonna. Teen Riches was restless but didn’t quite know what to do with herself. She was still feeling a bit grumpy and wasn’t keen on company so I went with Apis 30c twice hourly for 3-4 hours whilst keeping an eye on any changing symptoms.

Along with homeopathy, she was taking elderberry tincture 4 times per day, high dose Vitamin C and Zinc, taking Vitamin C to bowel tolerance. Whilst she was ill her intake of Vitamin C increased. How did I know this? She could take more Vitamin C before reaching bowel tolerance.

Her appetite and thirst were reduced, she looked pale and was generally feeling cold. I was keen to ensure she was taking in adequate fluids whilst ill but felt OK about the reduced appetite. When we are ill our body is not very interested in digesting foods when it is focusing on working through acute symptoms such as a cold and sore throat.

I was expecting this to develop into tonsillitis and after the Apis things changed again. Teen Riches was very sleepy, feeling weak, no thirst at all and complaining of feeling sore, the muscle soreness rather than aching bones. There are two remedies I think of for aching feeling with colds – Gelsemium and Eupatorium. The difference is Gelsemium has more muscle soreness feeling and Eupatorium more bone aching. This is not the only symptom to differentiate the two remedies but it helps when looking at that aching feeling.

All this had been happening over a 3-day period and whilst Teen Riches was certainly looking and feeling much better than she did, she was still not herself.

At this point I thought I would add in some Homeobotanicals. I have been using Homeobotanicals in clinic for a few months now as organ and system support alongside homeopathic treatment and the feedback has been very encouraging. I hadn’t used Homeobotanicals in acute situations – yet. I made up a blend for colds, catarrh, throat and added in an immune support blend. Teen Riches took 2 drops hourly for 4 hours.

The next day (day 4) I could see she had made a huge leap in recovery. Her eyes were brighter, she was smiling and wanting to chat. We continued the Homeobotanical drops and stopped the Gelsemium. Improvements continued, her energy was returning, along with her appetite. This is when I know we are on the end stages of the acute symptoms.

This acute took 4 days of homeopathic remedies, Homeobotanical blends, nutritional support, rest AND a couple of movies to work through the stages of the symptoms. Sometimes even with our very best intentions we get ill with acute conditions. We can often “catch” a cold before it sets in to be something more problematic. On this occasion we missed those first stages. I was anticipating it to develop into tonsillitis or laryngitis given her symptoms and the progression of them. Teen Riches has a history of tonsillitis in younger years which has been addressed with constitutional treatment. With the use of a few remedies for the acute symptoms she worked through this cold quickly and has bounced back just fine.

When dealing with coughs and colds follow the symptoms.

Cough and cold symptoms can develop and change – often quickly. You may find you need to change the remedy in response to this over the period of the acute, just as I did here.

All the remedies I used are available in a home prescribing remedy kit you can buy from Helios or Ainsworth’s who both mail worldwide.

I am sending out several immune support packs made up of Immuno Support Blend homeobotanicals and a combination flu and virus homeopathic remedy. If you are interested in these get in touch.

What is an Acute?

Not sure what an ACUTE illness is? What is the difference between ACUTE AND CHRONIC?

Discover which remedies can help with colds and sniffles.

Remedy kit for the home

Why you need to have a home prescribing remedy kit.

Did you find this blog post helpful?
If so I can send you my newsletter with links to my latest blog posts along with news and information about homeopathy and more.
Pop your details in here and you are all signed up.

Thank you for signing up!